The greatest weapons are those that have stood the test of time, evolving through the years but still retaining their basic characteristics. The Karambit knife is one of these.

Originating in ancient Indonesia hundreds of years ago, this knife has been valued for centuries for uses as diverse and varied as farming and fighting. Although in the past the knife could only be found in Asia, it is now used throughout the world by trained martial artists in hand-to-hand combat.

The knife’s agricultural origins are fascinating. It is believed the knife was initially constructed during the 11th century in Indonesia and then spread throughout southeast Asia. The curved nature of the knife seems to be modeled after the claw of a tiger, the shape of which makes it excellent at raking and jaggedly tearing. The knife was initially used by rice farmers who wielded it to uproot and cut weeds and other plants. It became a weapon when rice farmers needed to defend themselves against invaders.

Over the years the structure of the knife has been refined. While the blade was originally rougher and the appearance of the knife less sophisticated, now the Karambit is an impressive combination of style and modern technology.

The lethal capabilities of the Karambit proved quite effective, and numerous Asian cultures adopted the weapon as a tool for warfare. The blade was often coated in powerful, poisonous toxins, making the deep, ragged cuts even more deadly. The hooked nature of the knife made it harder to dislodge from a fighter’s hand, making it a preferential tool for self-defense. Asian women even used to tie the knife into their hair, hiding it well and then using it deftly against attackers.

How the Karambit Knife is Used Today 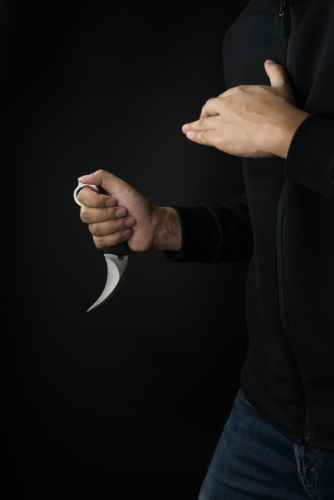 Today, the knife is used in different forms of martial arts, including Filipino Kali and Indonesian Pencak Silat. Fighters who skillfully use the Karambit are often called players. These players train extensively with the weapon to use it deftly and to best advantage.

The design of the Karambit knife is both aesthetically pleasing and practically useful. The knife has a curved blade that is effective in martial arts because it enables the fighter to capture an opponent’s limb, put pressure on it and then lacerate it. Given the weapon’s small size and curvature, it is easy to conceal and can successfully be a tool that catches an attacker unaware and makes him quickly regret his advances.

Unlike other more symmetrical blades, the curved, asymmetrical nature of the Karambit makes the wounds it creates more brutal and shocking.

Emerson Modifies the Design of the Karambit Knife

Emerson Knives has added its own design changes to create a unique version of this great blade.

The Emerson Karambit features the company’s own unique patented wave-shaped opening. This enables the user to carry the weapon without injury, flick open the blade with one hand and then attack the unsuspecting antagonist.

Additionally, the Emerson knife is aesthetically pleasing while still boasting a functional design. The 2.6-inch blade is black with a silver edge, and the 4.15-inch handle is both black and silver. On the back of the handle, there is a pocket clip, providing a practical way to hook the knife to one’s clothing and enable better concealment of the weapon. The classy combination of colors on the weapon gives off a sophisticated, sinister appearance while simultaneously showcasing the impressive technology involved in the construction of the weapon, with a pocket clip, folding capability and thumb hole.

The intimidating Emerson Karambit knife is regulated at the state level, so laws regarding its use vary from state to state. Often the legality of a knife depends on its blade length and the age of the carrier. It is best to check with your state’s laws to see what its individual rules are regarding Karambit knives.

Emerson Kniveshave taken a remarkable, ancient weapon and made it even more effective. The design of the Emerson Karambit has been crafted in such a way that makes the user able to conceal the weapon safely, throw it open deftly, hang on to it throughout the fight and deliver shocking, deadly wounds to an opponent.

Without a doubt, this knife is an expert tool that demands an individual’s attention, enthralling them with its smooth, functional appearance and its powerful, damaging potential.