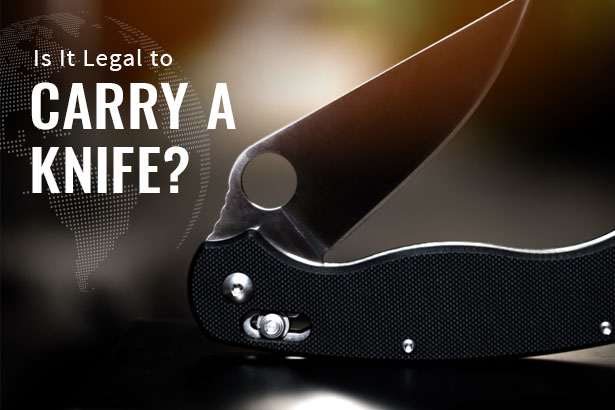 If you’re considering carrying a knife regularly, you must comply with state and local laws. However, figuring out which knives are legal to carry can be confusing. States and counties have different requirements, so the knife you carried every day for years could be illegal to carry if you travel or relocate to another state. Fortunately, with a little research, you can find details about knife carry legislation.

Before You Carry a Knife

Besides differing state laws, many counties and municipalities have strict laws about carrying weapons. Research where you live and where you frequently travel to ensure you are fully familiar with the laws.

Gun laws and knife laws may vary widely, according to your state, and especially for concealed versus open carry. In general, however, you cannot bring guns or knives to federal buildings or into schools. Many states have age restrictions on both gun and knife ownership and capacity and size. If you carry both a knife and a gun, ensure you comply with regulations for both weapons in your district.

Microtech Knives Are a Safe and Reliable Choice

If you carry an illegal knife, in some states and cities, you can be prosecuted for using it in a self-defense situation. While this does not seem fair, you do not want to be charged with a crime for protecting yourself. Knowing the laws and regulations for your area can help you determine which knife style works best for your purposes.

An Introduction to Knife Law Lingo

Here are a few terms to help you understand the complex knife laws and legislations you may encounter in your research.

Fixed blade: This is a knife that doesn’t fold in on itself and usually requires a sheath. Your kitchen knives are fixed blade knives. There are many benefits of a custom fixed blade survival knife, but it’s important to know length limits and other factors if you’re considering buying one for everyday carry.

Folding blade: This is a knife that can fold in on itself. Custom folding knives are great for everyday carry. It’s also important to understand the different folding knife locks to stay in compliance with local knife laws. 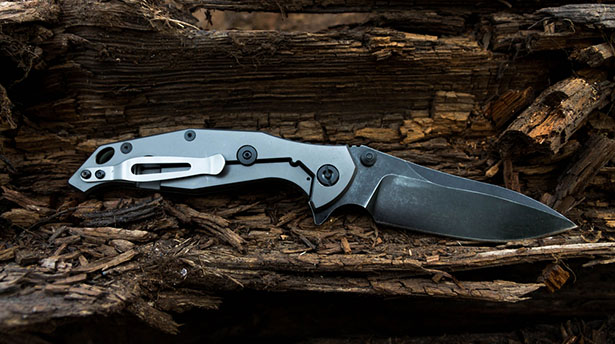 Switchblade: An automatic knife, or one that deploys a blade with the press of a button, is generally referred to as a switchblade. However, the line between switchblades, folding blades and gravity knives in legislation can sometimes be unclear. Whenever a legal body decides to restrict switchblades, they have to come up with their definition of what a switchblade is. For this reason, what counts as a switchblade can change from state to state or even from county to county.

Check Out Our Collection of OTF Knives

Dagger: A dagger is a knife with sharp edges on each side.

Stiletto: A stiletto knife is very slim and designed to stab. For this reason, it is often restricted.

Ownership law: An ownership law is any law that dictates parameters for knife ownership. These laws are about possession rather than about what you can carry outside of the home.

Carry law: Carry laws dictate what you can and can’t carry on your person outside of the home.

If you often travel, there are a few parameters for knives that are legal almost everywhere.

Choose a knife that’s not intended to be a weapon. Choose a multi-tool or a pocket knife. Select a blade that is no longer than two-and-a-half or three inches. If you stick within these parameters, your knife should be compliant with most knife carry laws.

You may find that those options are a bit limiting, especially if you use your knife for work or outdoor tasks. These knives also don’t make great self-defense weapons. If you want to expand your knife-carrying options, look into your jurisdiction’s carry laws. 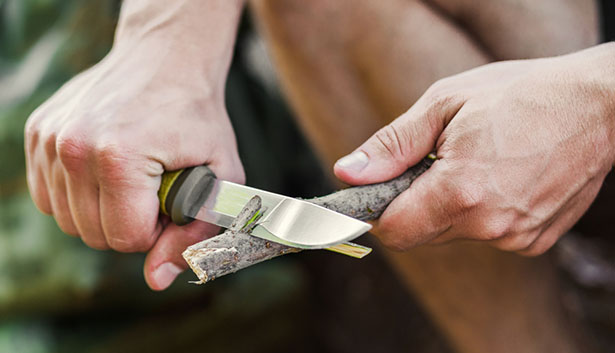 Carry laws are any laws or regulations that forbid you from carrying specific knives. These laws can apply to concealed carry, which is where you carry a knife hidden from the view of others, as well as open carry, where everyone can see the knife in your possession.

Ownership laws dictate which knives individuals are permitted to own and which knives are forbidden to own. Ownership bans for particular knives usually have their roots in history. For instance, knives or other weapons associated with prolific criminals or outlaw groups are often banned. Bowie knives are banned in many districts because of their association with outlaw groups.

“Per se” laws forbid specific knives by name, such as “switchblades.” Not all states have “per se” laws, and some “per se” are out of date or contain archaic language. Some counties and municipalities also have their own “per se” laws. Look in to your district and state laws to ensure your knife complies with any “per se” laws that might be on the books.

While this doesn’t apply to everyone, it is helpful to know that states and federal districts have different kinds of laws. Federal districts only conform to federal knife-carrying laws. If you happen to live in Washington, D.C., you have a little less to worry about when it comes to knife laws.

In Washington, D.C., it is legal to own every knife other than a switchblade. However, if the knife does not have utility purposes and could be used as a weapon against another person, you have to leave it at home. It’s illegal to conceal carry a knife that could be used to harm another person.

Statewide preemption laws are unique in that they turn the state into the sole authority on knife carry. Once statewide preemption laws have been established, no other political entity or local governing body can enforce any stricter laws than the state preemptions. This helps to streamline the law enforcement process and protect citizens from getting caught in the confusing, and sometimes contradictory, levels of legislation. 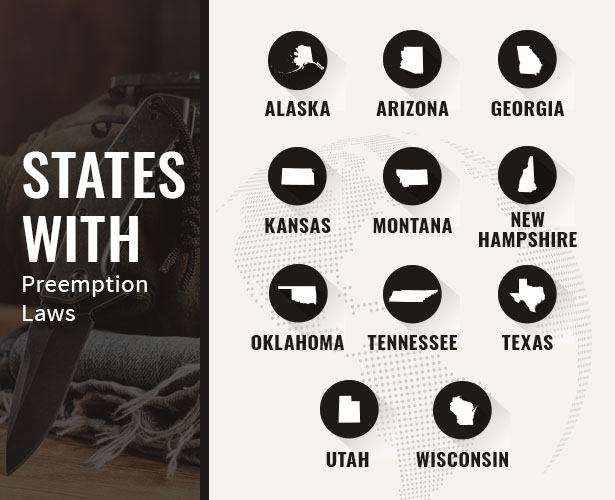 If you live or often travel in a state with knife carry preemption laws, you only have one source to check to make sure you’re carrying your knife legally. The states included as of October 2019:

And as of May 31st, 2020, West Virginia is included in the list of states with preemption laws.

The preemption laws in these states prevent a patchwork of local laws from ensnaring unaware, but otherwise innocent, knife owners.

States with Other Forms of Knife Owner Protection

Some states don’t have preemption laws due to the unusually straightforward nature of their laws or another legal form of knife owner protection. New Mexico and Wyoming are two such states.

Colorado, on the other hand, has its own knife owner protection. While Colorado lacks a statewide preemption law, another law offers limited protection to travelers. This law states that when you’re traveling in a personal vehicle, statewide knife laws prevail over municipal or county laws. However, this does not hold true for public modes of transportation. If you’re on a bus or a train, local laws may still apply.

Another important caveat to knife-carrying laws regards forms of transportation. The TSA prohibits all knives in carry-on baggage, other than rounded butter knives and plastic knives, but legal knives are permitted in checked baggage.

If you’re traveling by rail in the U.S., it’s important to know that Amtrak forbids all knives. While they don’t often reinforce all their rules with the rigor of the TSA, the regulations still exist, and unaware travelers could have their valuable knives confiscated if they’re not careful. If you choose to travel by bus, Greyhound, as per air travel rules, forbids knives in carry-on baggage but permits them in checked bags.

Lastly, remember that traveling by personal vehicle still subjects you to different federal, state and more local knife legislation. Many state laws permit police to search cars more readily than they might search a dwelling. Depending on the state, it’s possible your car could be searched without a warrant under probable cause clauses.

Alaska, Arizona, Kansas, New Hampshire and Utah all lack any restrictions on the type of knife individuals are allowed to carry. In these states, only the criminal use of knives is illegal. To make matters even more convenient, these five states all have preemption laws. This makes them among the safest and most free states for knife owners.

In Georgia, the only state-wide regulation of knives is that the blade of carried knives cannot be longer than 12 inches. As this state also has preemption laws, it is another knife-owner-friendly state.

South Carolina, Arkansas and South Dakota have no state-level knife restrictions. However, as these states do not have a preemption law, this means that a county or municipality could still pass a law banning specific types of knives.

These cities have very restrictive knife laws which have led to many otherwise-unwarranted arrests. 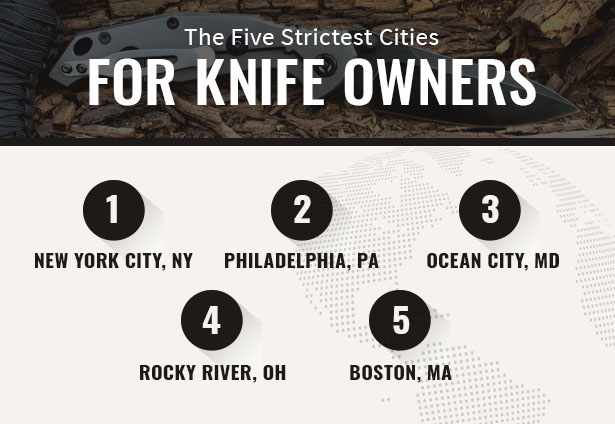 In NYC, all knives more than four inches long are illegal to carry in public, other than for camping, hiking, hunting, fishing or employment purposes. Individuals may also carry longer knives to and from sharpening services but only if they are kept concealed and safe from ready access.

In a vague and confusing stroke of legislation, NYC also prohibits any knife that a law enforcement official deems can be “wrist flicked” open. By this standard, many common pocket knives have been categorized as illegal gravity knives. Both retailers and owners have paid the price for this confusing law; retailers have forked over hundreds of thousands of dollars to avoid additional penalties, and over 60,000 people have been prosecuted since 2009.

Any open carry of knives is prohibited in NYC. This means all knives must be completely concealed even if they are legal to carry. For example, if the outline of a pocket knife can be seen from the outside of a shirt pocket, even if the knife itself is within the pocket, the carrier could be faced with confiscation and a hefty fine.

In Philadelphia, the laws are even stricter than in New York City but less confusing. All assisted-opening pocket knives, gravity knives and automatic blades are illegal to own. All knives are illegal to carry for anything other than work purposes. However, carrying a knife to and from that job is illegal, so knives must be left at the job location.

Ocean City has some of the most convoluted and confusing knife laws in the country. Ocean City’s laws prohibit the distribution, disposal, manufacture, possession, sale, gift-giving or display of a butterfly knife, assisted opening knife or fighting knife. When a recent law added assisted-opening folding knives to that list, it put some knife owners in a very awkward position. Suddenly, their assisted-opening pocket knives were both illegal to get rid of and illegal to own.

In Rocky River, any knife blade longer than two-and-a-half inches is illegal to carry or own, other than for law enforcement purposes. 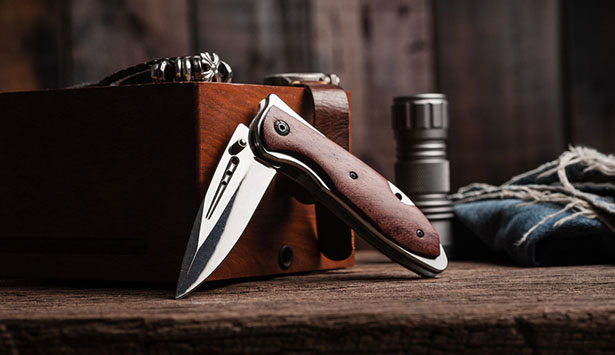 Navigating the Complexities of Knife Laws

If you want to carry a knife on an everyday basis, it’s critical to do your research ahead of time. If you’re in doubt about knife laws in your district, contact your local police station and talk with them about which knives are legal and illegal to carry or own. Police departments are one of your best resources for ensuring you comply with legislative regulations in your town or city.

Practicing proper knife safety, however, extends far beyond knowing which laws can get you in trouble. Practice taking care of your knife, storing and cleaning it properly and spreading the word about knife law education. If you’re still learning how to clean a pocket knife, it’s important to find resources online and begin cleaning regularly to keep its quality.

If you are interested in knife ownership or feel you could benefit from the sense of confidence and preparedness a knife can bring, contact eKnives at (423)-525-9477.