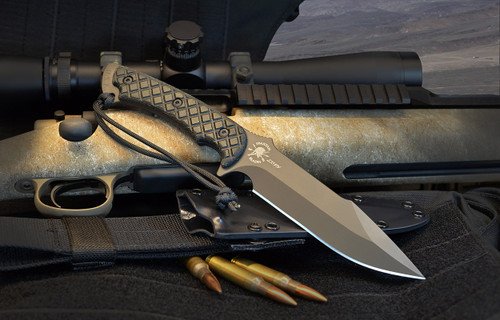 In Greek mythology, Horkos (or-kos) was the personification of the curse that would befall anyone who broke a sacred oath. The Greeks considered Horkos to be the demon-protector of honor, and honor was everything to the ancient Greeks.

The Spartan Horkos custom combat knife was commissioned by the Combat Weapons Team of the United States Military Academy in West Point, NY, with custom etching to honor their graduating class. As all graduates of West Point are defenders of our freedom and take a sacred oath to protect the U.S. Constitution, we chose Horkos as the name of this formidable combat knife.

The Horkos is designed as an excellent all-around combat and utility knife. It’s intended to see its user through a variety of tough situations, and is crafted with reliability, durability, and functionality in mind.